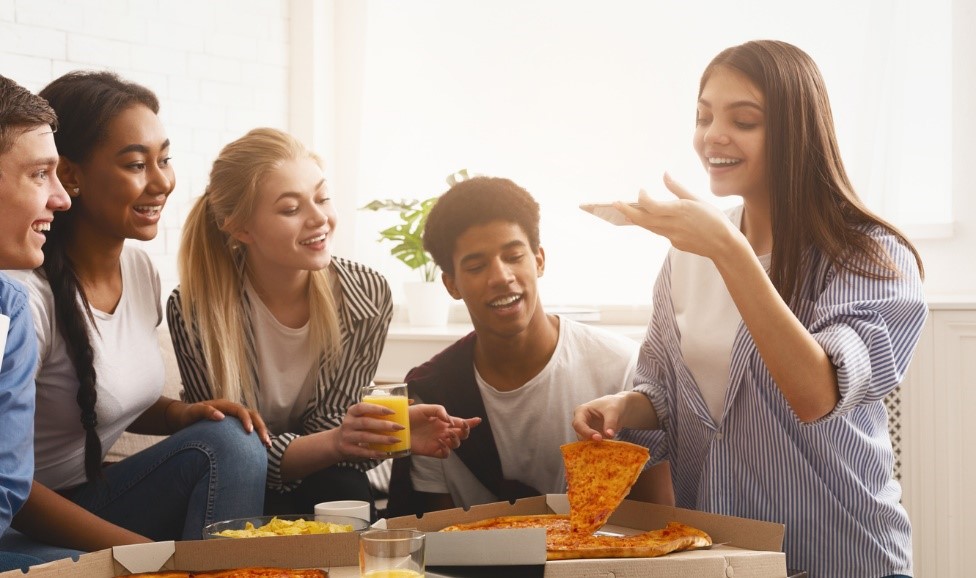 While Domino’s is a well-known pizza brand, it’s hardly the most exciting dining option out there. The chain has existed for over 60 years and has more than 15,000 locations worldwide, but its success is based on the simplicity of its product and the speed of its delivery.

Starting in 2014, however, Domino’s made a revolutionary change to its business model, providing consumers with the ability to order through a mobile-device virtual assistant, Dom.

From there, the voice-ordering system at Domino’s has evolved to the point where it is industry-leading, and a great model for other restaurants to follow.

Here’s what Domino’s is doing, and how you can replicate their success with your own restaurant or chain.

The beginnings of the Domino’s voice campaign

As with many pizza chains, Domino’s has long provided the ability to order online. The main drawback regarding this type of ordering is that it requires the consumer’s attention, as he or she must look at a screen while choosing toppings and typing payment information.

In 2014, Domino’s introduced its voice-ordering strategy, which included a bot named Dom to assist users as they put their orders together. Dom is completely hands-free and helps customers apply coupons, add items to their orders and create their pizzas.

Not satisfied with this success, Domino’s continued its dig into voice technology and developed even more ways for customers to place their orders.

By 2016, smart speakers were becoming popular, and Domino’s saw another way to make ordering easier for its existing customers.

In February of that year, the brand introduced an Alexa skill that would allow consumers to order pizza directly through their Amazon smart speakers using only their voice.

The skill did a lot of things right. For starters, it was easy: All consumers had to do was tell Alexa to open the Domino’s skill and place their Easy Order, which was a specific pizza each the user had already set-up through the app. They could set up a new order through their speaker, as well.

There was also a novelty factor involved with ordering through voice — Domino’s was one of the first brands to utilize this technology and it seemed futuristic and cool to use. Domino’s had very little competition in this regard, helping to boost their sales.

By the end of 2016, about 20% of all Domino’s sales went through Alexa and the chain generated about $5.6 billion in worldwide digital sales.

What the future holds

In addition to Alexa, Domino’s is also integrated with Google Home, the Apple Watch, Twitter, Facebook Messenger and Samsung Smart TV. Dominoes is a vital brand to watch when considering just how big ordering through voice can become.

A 2017 survey by Business Insider Intelligence suggested that about 8% of American consumers were using voice commands to buy items, but their estimates noted that by 2022, that number could grow to 31%.

In the future, we could see Domino’s become 100% digitally driven with all orders coming through voice and other technologies, leaving employees free to make and deliver pizzas rather than answering phones.

Using voice to your advantage

Today, voice technology is more widespread than it was in 2014, and now’s the time to get involved and give your brand an advantage over your competitors. The success of Domino’s shows that consumers want to and will use this technology when it’s available to them, both for convenience and the novelty factor.

Respond Fast offers one such way to use voice technology through its Voice Activated Call to Action™ (VACTA) system. A VACTA included in offline advertisements allows your customers to use their smart speakers or virtual assistants to access offers, information, surveys, and more.

This technology allows businesses to present any type of offer through voice, giving you all kinds of flexibility to reach the ideal customer.

Stop by our contact page to learn more or to start your first VACTA campaign.

4 Ways to Reach Customers Through Their Smart Speakers
Smart speaker owners want to hear from their favorite brands, but you'll have to get creative to reach them. The smart speaker industry is growing exponentially. TechCrunch reports that 146.9 million devices were sold globally in 2019, which is up 70% from the previous year.
Why Consumers Are Using Voice Technology
Voice technology is becoming more popular because it fits seamlessly into our busy lives, and marketers can take advantage to appeal to customers no matter where they are. More consumers are using voice technology every year.
How and Why Young People and Adults Are Using Voice Technology
Voice search is growing in popularity and creating new opportunities for marketers to reach consumers through this technology
Recent Posts
Categories
© Respond Now, LLC & Respond Fast 2022 - All Rights Reserved
Back To Top